Mysteries Of The Moon – 1

Until very recently we knew very little about the Moon. The Moon missions returned with samples of Moon rock and these indicated that the Moon started with a bang! 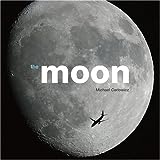 Tags: Mysteries Of The Moon - 1