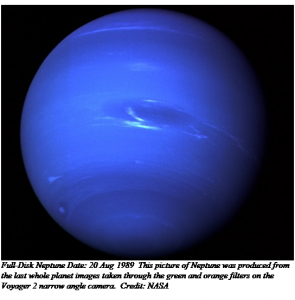 It was first spotted in 1846 after astronomers noticed that Uranus wasn’t moving along it’s orbit exactly as it should. It was guessed that an unknown planet was orbiting farther out and influencing Uranus.

John Couch Adams in England and Urbain Leverrier in France independently determined where the new planet might be. When German observers Johan Galle and Heinrich d’Arrest checked, they found the new planet right where Adams and Leverrier had predicted it would be. Galle also discovered Neptune’s largest moon, Triton, seventeen days later.

Neptune is so far from the Sun that it’s orbit lsts 164.79 Earth years. It has not yet completed one orbit since it was discovered in 1846. Since Neptune orbits so far from Earth, little was known about it until the Voyager 2 spacecraft made a flyby visit in 1989.

The spacecraft showed that Neptune is a cold, blue echo of Uranus with some important differences. Like Uranus, Neptune is a ball of hydrogen, helium and methane. The tilt of Neptune’s axis at 29.6 degrees is not as extreme as Uranus’. This means that it’s seasonal changes are less dramatic.

Neptune’s interior make-up is primarily methane ice just as Uranus’ is. Motions in the interior of Neptune help form the magnetosphere of the planet.

The magnetosphere of Neptune is very much like that of Uranus, medium sized but still much larger than Earth’s. It is probably made in the middle with ice rather than iron at the core.

Because of this misalignment, the magnetosphere goes through wild variations during each rotation. The magnetic field of Neptune is about 27 times more powerful than that of Earth.

It is suggested that the rings of Neptune affect the motion of particles in this unique magnetosphere. Just like Saturn, Neptune’s magnetosphere produces aurora but they are very faint. Radio emissions and other waves such as whistler waves, choruses and hisses have also been detected. 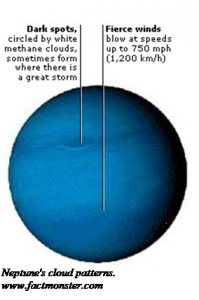 The atmosphere extends to great depths. It gradually merges into water and other melted ices over a heavier, approximately Earth-size, solid core. Neptune’s blue color is the result of methane in the atmosphere resulting in a vivid, bright blue. There may be an unknown component that causes this more intense color that is absent in Uranus’ atmosphere.

Neptune has the strongest winds in the Solar System, blowing at up to 2,300 ft/sec (700 m/sec). Voyager photographed a giant storm known as the great Dark Spot and a fast-moving cloud of methane ice crystals called the Scooter. Observations from Earth show that storms come and go over the years, probably driven by Neptune’s internal heat.

Other smaller dark spots were visible along with swirls and bands in the clouds. These dark spots are believed to be holes in the upper atmosphere that allow the darker clouds to show through.

These dark clouds are thought to be composed of hydrogen sulphide. The great dark spot was originally thought to be a long-lasting feature like the one on Jupiter. However, in 1994 the Hubble space telescope turned its eye toward the Neptunian system and discovered that the planet’s giant spot had vanished.

Like its sister planet, Uranus, Neptune has a very thin, dark system of rings. These rings were first observed in 1968 by a team of astronomers led by Edward Guinan. When the rings were first discovered, they were thought to be incomplete ring segments.

It was suspected that these rings might have gaps after observation of a stellar occultation in 1984. Similar to the ring discovery of Uranus, the star flickered as the rings passed in front of it. But astronomers were confused when the star failed to flicker again as the planet passed it.

In 1989, the Voyager 2 spacecraft finally settled the issue by revealing faint, complete rings around the planet. These rings were discovered to have a mysterious clumpy feature that is not yet fully understood.

This may have something to do with the gravity of some of the small moons that orbit near the rings. Like the rings of Uranus, the rings of Neptune are very thin and dark. Scientists think the rings are made of a mixture of ice and rock.

The Voyager 2 spacecraft showed five distinct rings. Astronomers believe these rings to be fairly young. They may have been formed when a small moon was pulverized by some unknown catastrophe.

Two Neptunian moons were known before Voyager. Its flyby added six. Neptune now has about 30 known moons. Neptune’s largest moon is named Triton. Triton is much larger than any of the planet’s other moons. Triton is a very cold place so the moon is covered with ice. The surface temperature can reach -392.8º F (-236º C). 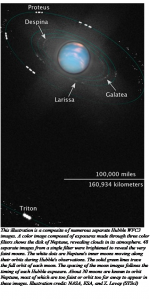 Voyager 2 revealed fascinating details about Triton. Part of it’s surface resembles the rind of a cantaloupe. Ice volcanoes spout what is probably a mixture of liquid nitrogen, methane and dush, which instantly freezes and then snows back down to the surface.

Triton looks like a green melon while its icecaps of frozen nitrogen look like pink ice cream. It also has volcanoes that erupt fountains of ice. Other geographical features include geysers like the ones at Yellowstone Park on Earth.  These geysers shoot ice 8 km (5 miles) high into Triton’s thin atmosphere. There may be water under the ice at Triton. It is even possible that there might be life in that water. The interior of Triton is probably geologically active.

Triton is the only large moon in the solar system that circles its planet in a direction opposite to the planet’s rotation. This is a retrograde orbit. It also suggests that it may once have been an independent object that Neptune captured.

The disruptive effect this would have had on other satellites could help to explain why Nereid has the most eccentric orbit of any known moon. Nereid is almost seven times as far from Neptune at one end of its orbit as at the other end.

Neptune’s gravity acts as a drag on the counter-orbiting Triton, slowing it down and making it drop closer and closer to the planet. Millions of years from now, Triton will come close enough for gravitational forces to break it apart. This will possibly form a ring around Neptune bright enough to be seen with a telescope on Earth.

The rest of Neptune’s moons are much smaller than Triton. Nereid was discovered by Gerard Kuiper in 1949. Despina, Galatea, Larissa, Naiad, Proteus and Thalassa were found by the Voyager 2 spacecraft in 1989.

Five more small moons have been found recently. Three of those were discovered in 2002 and two more were found in 2003. The newest moons don’t have official names yet.

There are currently no immediate plans for a future mission to the Neptunian system. NASA is, however, considering another mission to the giant planet in the long term. This next mission would likely involve a nuclear powered spacecraft that would be sent to explore Neptune and its moons in detail.