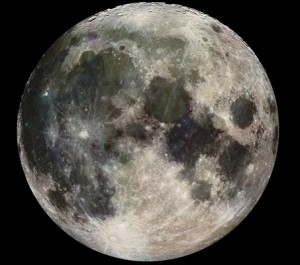 The Moon is Earth’s only natural satellite. Scientists say that the moon was formed when an asteroid hit the Earth as it was forming. The debris from that impact orbited the Earth until it all came together to form the Moon.

It was constantly hit by other debris and meteorites. These punched lots of craters into the surface. The big impacts dug broad basins while the smaller impacts just made smaller dimples.

Dark lava, or molten rock, flowed out to fill the lower spots before it cooled. These dark areas are called seas because ancient astronomers thought they were the dried up beds of oceans.

It orbits the Earth about 384 thousand km (239 thousand miles) away. It’s orbit takes it a little over 27 days to go around the Earth. It spins at the same rate during that time so the same side of the moon faces the Earth all the time.

The mantle is the thickest portion of the Moon. It is made up of mostly solid rock, kind of like a milkshake. It’s cool enough for most of the rock to solidify but hot enough to still be a little liquid.

The sun always lights exactly one half of the moon. As the Moon orbits the Earth, it changes how it looks in the sky. These are called phases of the moon cycle. We call them phases because we see the moon from different angles as it moves around the Earth.

Phases of the moon

In order to understand the phases of the moon, you need to think of a clock running backwards. This is called anti-clockwise or counter-clockwise. Imagine that 12 o’clock is the New Moon.

New means that the Moon cannot be seen. It is also called a Dark Moon or the dark of the Moon. Even on a clear night, if you are outside of a town or city, it is very dark since starlight doesn’t give enough light to see.

From the New Moon, it grows toward the Crescent Moon and on to the Half Moon. It starts out as a very thin sliver with the light part being on the right-hand side and curving to the left.

It takes about one week for it to grow from New to Half. This is why it is also called a Quarter Moon. When the Moon is waxing, it is the First Quarter Moon.

The Second Quarter is measured from the Half Moon through the Gibbous Moon to the Full Moon. This takes another week. Gibbous means humped or bulging. This describes how the Moon looks before it is completely round in the Full Moon.

A Full Moon means that we can see the entire lit surface of the Moon. An actual Full Moon only lasts a few seconds because of the speeds that the Earth and Moon both move.

However, without extremely sensitive instruments, the human eye can’t see the difference between a Moon that is lit 100% and a Moon that is only lit 99.9%. The Full Moon seems to last up to three days before it can be seen to start shrinking toward the Waning Gibbous Moon again.

After the Full Moon, the Third Quarter moves from Full to Half again. The lit portion is now on the left-hand side with the bulge of the Gibbous Moon pointing to the right. The last quarter moves from Half to New where the cycle starts all over again. 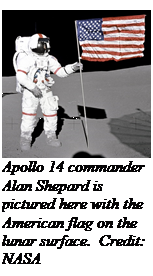 More than 100 spacecrafts have been launched to explore the Moon. It is the only other place in our solar system that has been visited by humans. The U.S.S.R. was the first to send Luna 1 and Luna 2 to the Moon in 1959.

The United States followed soon after with three robotic missions to find out if humans could land on the surface. The Ranger missions were a series of impact probes that were sent between 1961 and 1965.

They were followed by the Lunar Orbiters which were used to find suitable landing sites in 1966 and 1967. Those were accompanied by the Surveyors that actually landed on the surface between 1966 and 1968 without being crashed like the Ranger missions were.

The first time that humans landed on the Moon was July 20, 1969. During the Apollo missions between 1969 and 1972, 12 American astronauts walked on the surface of the Moon.

They used the Lunar Roving Vehicle to travel on the surface so that they could study more than just the area where they landed. The astronauts also brought 842 pounds (382 kilograms) of lunar soil and rocks back to Earth for further study.

For a very long time, the Moon has been less important to humans to explore and study. However, new missions have been sent to increase our knowledge of our nearest spatial neighbour.

The European Space Agency sent SMART-1 in 2003. That mission was followed by Kaguya from Japan, Chang’e-1 from China, and Chandrayaan-1 from India between 2007 and 2010.

More recently, both China and the United States have launched new missions to continue studies so look for new announcements on what those astronomers and scientists find out!