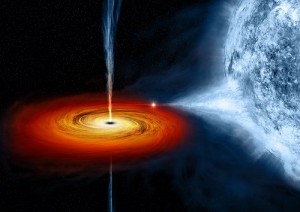 An optical image from the Digitized Sky Survey shows Cygnus X-1, outlined in a red box. Cygnus X-1 is located near large active regions of star formation in the Milky Way, as seen in this image that spans some 700 light years across. An artist’s illustration on the right depicts what astronomers think is happening within the Cygnus X-1 system. Cygnus X-1 is a so-called stellar-mass black hole, a class of black holes that comes from the collapse of a massive star. New studies with data from Chandra and several other telescopes have determined the black hole’s spin, mass, and distance with unprecedented accuracy.

Black holes – Some galaxies have small, bright centers that emit lots of energy. These are known as active galaxies. Astronomers believe their energy is generated by a small but extremely massive object. These are most likely black holes.

Black holes are so dense that they swallow everything that comes near them. Even light can’t escape their incredible gravity. If you fell into a black hole, you’d stretch like spaghetti!

A stellar black hole is a black hole that forms after a supernova. It has about the mass of a star. However, a galactic black hole in the heart of a galaxy can be as massive as a billion Suns.

Gravity shrinks a black hole to an unimaginably small point called a singularity. Around a singularity, gravity is so intense that space and time are bent into a funnel. The opposite of black holes may be white holes. Scientists think that white holes are more likely to spray out matter and light like a fountain.

Since black holes pull in light, astronomers can’t see them directly. Instead, they pinpoint black holes by looking for the effects of extremely strong gravity.

An active galaxy’s energy comes from the region just outside the edge of a black hole. Swirling around a black hole like water going down a drain is a disk of material made from torn-apart stars and clouds of gas.

The black hole’s powerful gravity squeezes this disk with extreme force, heating it to hundreds of thousands of degrees. Before the matter is sucked into the black hole, it radiates X-rays, radio waves and lots of visible energy.

A black hole is so powerful that it can bend light traveling near it. When this happens, the optical illusion this creates makes it look like there are two galaxies in that spot. In the case of the Einstein Cross, this effect produces four images of the distant object.

Astronomers have found several kinds of active galaxies that harbor a black hole in their center. The activity differs depending on how compressed the gas is near the black hole and whether we are looking at the disk from one side or from above.

In some active galaxies, the disk around the black hole is very thick. This lets some energy and hot gas shoot out from the disk. This can produce enormous jets that can stretch thousands of light-years.

The bright cores of active galaxies that vary in brightness over weeks or days are known as quasars. That is short for quasi-stellar object. Quasar PKS 0637-752 gives off the energy of 10 trillion Suns.

In the Einstein Cross, the four outside objects are all images of the same quasar! In the middle is a massive galaxy whose gravity works like a lens to bend the quasar’s light. This creates four images instead of one. The galaxy lies 20 times closer to Earth than the quasar does.

Black holes are some of the strangest and most fascinating objects in outer space. Albert Einstein first predicted black holes in 1916 with his general theory of relativity. The term ‘black hole’ was coined in 1967 by American astronomer John Wheeler. The first black hole was discovered in 1971.

Stellar black holes are small but deadly. When a star burns through the last of its fuel, it may collapse in on itself. For smaller stars, up to about three times the Sun’s mass, the new core will be a neutron star or a white dwarf. However, when a larger star collapses,it continues to fall in on itself to create a stellar black hole.

Black holes formed by the collapse of individual stars are relatively small but they are also incredibly dense. Such an object packs three times or more mass than the Sun into a city-size area.

This leads to a crazy amount of gravitational force pulling on objects around it. Black holes consume the dust and gas from the galaxy around them, growing in size. According to the Harvard-Smithsonian Center for Astrophysics, the Milky Way contains a few hundred million stellar black holes.

However, they have a radius similar to that of Earth’s closest star. Such black holes are thought to lie at the center of pretty much every galaxy, including the Milky Way. Scientists aren’t certain how such large black holes spawn.

Once they’ve formed, they can easily gather mass from the dust and gas around them. That material is plentiful in the center of galaxies which allows them to grow enormously.

Super-massive black holes may be the result of hundreds or thousands of tiny black holes that merge together. Large gas clouds could also be responsible, collapsing together and rapidly growing. A third option is the collapse of a stellar cluster, a group of stars all falling together.

Scientists once thought black holes came in only small and large sizes. However, recent research has revealed the possibility for the existence of midsize, or intermediate, black holes.

Such bodies could form when stars in a cluster collide in a chain reaction. Several of these forming in the same region could eventually fall together in the center of a galaxy and create a super-massive black hole.

In 2014, astronomers found what appeared to be an intermediate mass black hole in the arm of a spiral galaxy.

Maybe someday astronomers will be able to see if black holes and white holes can join together. It is thought that these two objects colliding will cause a tunnel to form. These tunnels are called wormholes. Perhaps if this happens, we’ll be able to unlock the secrets of time travel!