|Asteroids, meteors, meteorites – Besides the planets and their moons, many other objects are in the family of the Sun. The most spectacular, as seen from Earth, are comets.

Bright comets have been noted throughout history, instilling great awe of the heavens. Asteroids, meteors, meteorites are other residents of our solar system. Asteroids are suddenly in the news as astronomers using new ways of observing them find asteroids coming relatively close to the Earth. 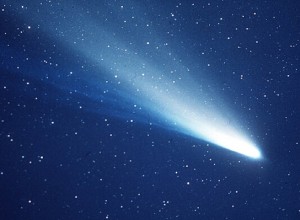 Every few years, a bright comet fills our sky. From a small, bright area called the head, a tail may extend gracefully over one-sixth or more of the sky. The tail of a comet is always directed away from the Sun.

The tail may give an impression of motion because it extends out only to one side. However, the comet does not move visibly across the sky as we watch. With binoculars or a telescope, however, an observer can accurately note the position of the comet’s head with respect to nearby stars.

After a few hours, we can detect that the comet is moving at a slightly different rate from the stars. Still, both comet and stars rise and set more or less together. Within days or weeks a bright comet will have become too faint to be seen with the naked eye.

However, it can be followed for additional weeks with binoculars and then for additional months with telescopes. Most comets are much fainter than the one just described.

About a dozen new comets are discovered each year and most become known only to astronomers. If you are ever lucky enough to discover a comet and are among the first three to report it, it will be named after you.

At the center of a comet’s head is it’s nucleus. This is a few miles across. Scientists believe that the nucleus of most comets are like dirty snowballs.

The nucleus may be made of ices such as water, carbon dioxide, ammonia and methane with dust mixed in. The rest of the head is called the coma. This may be as large as 62,000 miles (99,779 kilometers) or so across.

This is the part of the comet that we can see more easily because it is gas and dust that reflects sunlight toward us. Many comets actually have two tails. The dust tail is caused by dust particles released from the ice of the nucleus.

The gas tail is composed of gas blown out more or less straight behind the comet by the solar wind particles from the Sun.

It is generally accepted that trillions of comets surround our Solar System in a sphere almost 1 light year in radius. This sphere is far outside Pluto’s orbit. It is called the comet cloud.

Scientists aren’t sure why comets get pulled out of the comet cloud, but sometimes this does happen. The comet then approaches the Sun in a long ellipse. The comet’s orbit may be altered if it passes near one of the larger planets of our Solar System.

Because the comet cloud is spherical, comets are not limited to the plane of the ecliptic and come in randomly from all over the place. As the comet gets closer to the Sun, the solar radiation begins to vaporize the molecules in the nucleus.

The tail forms and grows longer as more of the nucleus is vaporized. Even though the tail can be millions of miles long, it is still so thin that only the tiniest bit of the nucleus may be lost. This means that a comet can pass around the Sun many, many times. 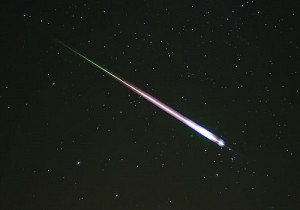 There are many small chunks of matter in space. They range in size from a few feet to tens of yards across. When these chunks are in space, they are called meteoroids.

When one hits the Earth’s atmosphere, friction slows it down and heats it up. Such events result in streaks of light in the sky. We call these shooting stars but they are also known as meteors. When a fragment of a meteoroid survives the atmosphere, it is called a meteorite.

Space is full of meteoroids of all sizes, with the smallest being most abundant. Most of the small particles, less than 1 mm across, may come from comets.

Most of the large particles, more than 1 cm across, may come from collisions of asteroids in the belt around the Sun in which most asteroids are found. Most of the meteorites that hit the Earth are stony in nature.

These stony meteorites resemble ordinary rocks and disintegrate with weathering. They are not usually discovered unless their fall is observed. This explains why most meteorites discovered at random contain iron.

Meteors often occur in showers. This is when meteors are seen at a rate far above average. Meteor showers take place all through the years and are usually named after the area of the night sky or constellation that they fall from.

Few people see these showers though since they seldom happen at a good time. In other words, you have to be in the right place on Earth at the right time to see them. Below is a list of the various meteor showers that occur during the year. 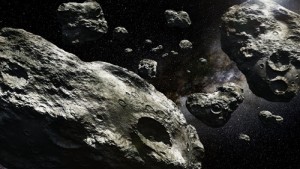 In recent years the discoveries of new asteroids and comets have dramatically increased, numbering about 10,000 at the current estimate. blogcritics.org

The eight known planets and the known dwarf planets were not the only bodies to result from the dust cloud that collapsed to form the Solar System billions of years ago.

Thousands of minor planets, called asteroids, also resulted. Asteroids are assigned a number in order of discovery and then a name. The name and number are often listed together. Asteroids rarely come within a million miles of each other, though occasionally collisions do occur.

Meteoroids are produced in these collisions. These asteroids are usually Earth-crossing, which means the orbit of the asteroid crosses the orbit of Earth. Luckily, scientists believe that only a few dozen of them are greater than about half a mile (about 1 kilometer) in diameter.

Statistics show that collisions of this size should take place every few hundred million years. This could have drastic consequences for life on Earth. Still, this is pretty often on a cosmic scale. – Asteroids, meteors, meteorites