The Earth – Our Planet 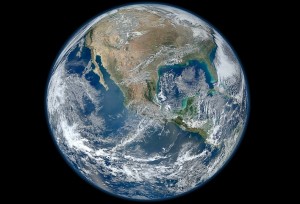 The Earth is our home planet. It is the only planet in the solar system that supports life. Everything we need to live is contained under a thin layer of atmosphere. That thin layer is all that separates us from the cold, airless void of space.

Earth is the third planet from the sun. It orbits the sun at about 150 million kilometers (93 million miles). Seen from space, it is the Blue Planet. That name comes from the blue haze of our atmosphere and the deep blue color of the oceans.

Earth is the only planet that has water in all three of its forms; liquid, solid and vapor. Earth is one of the four terrestrial planets. It has a solid surface of mountains, valleys, canyons, plains and a whole lot more.

What makes Earth different from the other rocky planets is that about 70 percent of its surface is covered by oceans. Only about 3 percent of the water on Earth is fresh water. The rest of the water, in either liquid or solid form, is salt.

Of the 3 percent fresh water, more than 2 percent is frozen in ice sheets and glaciers. This means that less than 1 percent of fresh water is found in lakes, rivers and underground. The 30 percent left over is solid land that rises above sea level.

The oceans help reduce the extremes of hot and cold. They do this by absorbing solar energy in the hot areas around the equator and moving it to the colder regions. These differences in heat and cold drive our weather and climate. 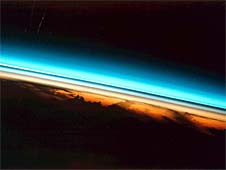 This photograph of the colourful layers of Earth’s upper atmosphere was taken from the space shuttle, looking sideways across Earth’s atmosphere. Image Credit: NASA

Earth’s atmosphere is about 300 miles (480 kilometers) thick, but most of it is within 10 miles (16 kilometers) of the surface of the ocean. Air pressure decreases as altitude, or the height of an object, increases.

The presence of oxygen also decreases the higher you go in the atmosphere. The Earth’s atmosphere is held in place by gravity. It is made up of four gases in significant amounts; nitrogen at 78 percent, oxygen at 21 percent, argon at 0.93 percent and carbon dioxide at 0.038 percent. Other gases and water vapor are also present but only in very small amounts.

The atmosphere is divided into five separate layers. There are no physical barriers between the layers though. The layers are separated by temperature differences more than anything else. 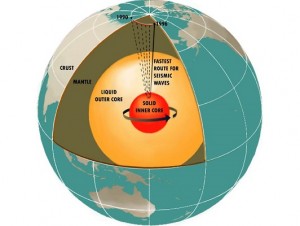 A cut-away illustration of Earth’s interior. Included in the diagram is the movement of magnetic north from 1900 to 1996. Graphic Credit: Dixon Rohr

When a thin plate of the crust under the ocean and a thick continental plate collide, the thin plate dives beneath the continent and melts. Melted rock, or lava, from deep inside the Earth comes up and makes a volcano.

These crashes happen about as fast as your fingernails grow. Other features of the land are created when these plates move, like mountains.

Just like the making of volcanoes, mountains are made when one continental plate slides beneath another. That’s why one side of a range of mountains is a sharp slope while the other side is an easier incline.

The crust is where nearly all of the life on Earth lives, from humans down to rabbits, mice and ants. The dry land of the continents is mainly made up of granite.

There are other lighter minerals included in what makes up the land called silicates (SILL-ih-kates).  The continental crust can be up to 46 miles (75 kilometers) thick but it is often thinner where there are no mountains.

The average thickness of the crust that makes up the land is about 25 miles (40 kilometers). The crust beneath the ocean is made mostly of darker volcanic rock called basalt. Basalt is created when the molten rock under the crust seeps up and comes in contact with the cold water of the ocean.

Beneath the hard crust of the Earth where we live, is the mantle. The crust floats on the mantle like wood floats on water. This is where lava comes from. It isn’t solid but flows slowly.

This slow movement in the rock of the mantle makes the continents shuffle. It also causes earthquakes, volcanoes and the formation of mountain ranges. The mantle is about 1,800 miles (2,900 kilometers) thick.

The closer you get to the inner core, the hotter it is. This means that the outer core is almost as thin as water even though it is rock. The second part is the inner core and it is solid iron. It spins at a different speed than the rest of the planet.

The temperature is believed to be about 12,600º F (7,000º C) which is hotter than the surface of the sun. The solid core is about 1,600 miles (2,600 kilometers) in diameter. Scientists believe that the spinning of this iron ball is what creates Earth’s magnetic field. 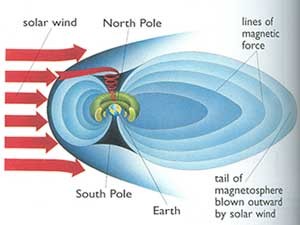 When this happens, those particles smash into air molecules above the poles. This is how the Northern and Southern Lights are formed. Because the magnetic field is created by the movement of the outer core, the magnetic poles are also moving.

The magnetic North Pole has recently sped up its movement to 24 miles (40 kilometers) per year. Scientists think that it will move out of North America and into Siberia in the next few decades.

The magnetic field is changing in other ways too. According to NASA (National Aeronautics and Space Agency), the magnetic field has gotten about 10% weaker in the last 150 to 200 years. This isn’t nearly as impressive as what it has done in the past. Sometimes the fields flip completely with the north and south poles switching places!