Mars – An Introduction to the Red Planet 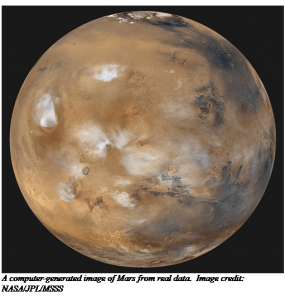 Mars is the fourth planet from the sun. It is also the second smallest planet in the

Mars is the fourth planet from the sun. It is also the second smallest planet in the solar system after Mercury. Like Mercury, Venus and Earth, it is a rocky planet and has a lot of surface features similar to the other rocky planets. I

It has impact craters, volcanoes, valleys, deserts and polar ice caps.  Because of the axial tilt, Mars also has seasons just like Earth.

Mars is called the Red Planet. In a lot of ways, Mars is looks a lot like Earth except that it doesn’t have blue water and green land. It looks red because of a mineral called iron (III) oxide, also known as hematite or rust, that is very common in the crust of the planet. If you look past the surface, Mars and Earth are a lot alike. Here are a few ways that the two planets are similar.

Mars and Earth are so much alike that it’s hard to believe that scientists haven’t found anything alive there. But there are also many differences which is what makes Mars such an interesting planet to study. 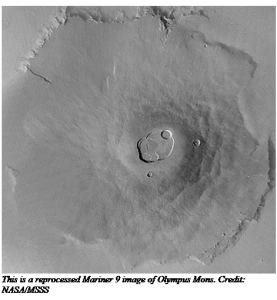 Mars has some of the most interesting geology. Did you know that Mars has the largest volcano in the whole solar system?

Olympus Mons is the largest volcano in the northern region scientists have named the Tharsis (THARR-sis) region.

It is called a shield volcano and is about the size of the state of Arizona. This volcano is about three times the height of Earth’s Mount Everest. Everest is 8.8 kilometers (5.5 miles) high while Olympus Mons is between 21 and 27 kilometers (13 and 16 miles) tall.

It is either the tallest or the second tallest mountain in the solar system, depending on how it is measured. Olympus Mons is so huge, along with the other volcanoes in that range, that it makes the planet look lopsided. 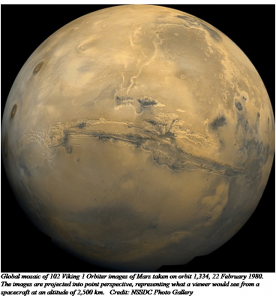 Mars also has a gigantic crevice around its equator. It is called the Mariner Valley. This valley is about 4000 kilometers (2485 miles) long and 7 kilometers (4 miles) deep.

That’s about the distance between New York and Los Angeles. Scientists believe that this chasm was created by swelling of the Tharsis region which made the area around the valley to collapse.

In 2012, astronomers began to think that the area of this valley was a boundary where tectonic plates met. That would make Mars a two plate planet which is different from Earth’s seven to twelve plates.

Scientists state the Red Planet lost its magnetosphere (mag-NEAT-oh-sphere) about 4 billion years ago.

They think it was because of a great number of meteoric impacts on the planet. Because the magnetosphere is gone, the solar winds lower the density of the atmosphere and pulls atoms away into space.

There are faint traces of oxygen and water as well. Since Mars has such a minimal atmosphere, the climate is very different from other planets.

The thin atmosphere makes it hard for the surface to store heat from the sun and it’s eccentric orbit makes the seasonal temperatures more extreme.

Because of the wide range of temperatures and how quickly they can change, Mars has some of the largest dust storms in the solar system.

These storms may just affect a relatively small area, but they can also be large enough to cover the entire planet. The planet-wide storms tend to occur when Mars is closest to the sun. 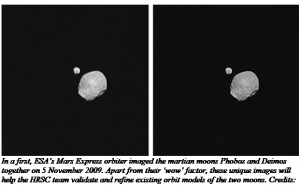 Mars has two moons, Phobos (FOE-bow-ss) and Deimos (DEE-moss). These two moons are very irregular in shape and scientists think that they may have been asteroids caught by the gravity of the Red Planet.

Phobos is the larger of Mars’ moons and is also the closest orbiting. Since this ‘moon’ is so close to the planet, it only takes 4 hours and 30 minutes to cross the Martian sky. No one knows where Phobos came from but it looks nothing like our Moon.

Because of it’s odd shape, the gravity can change drastically as it orbits and rotates, sometimes even doubling.

Deimos is the second of Mars’ moons and is much, much smaller than its brother moon, Phobos.  The greatest measurement of the moon is 15 kilometers (9 miles).

The moon is made up of the same materials that asteroids and meteorites are made of. Deimos is a lot farther away from Mars than Phobos, so far that it looks like a star from the surface of Mars instead of a moon.

Many missions have been sent to Mars and a lot of information has been gathered. People think that all of the money spent to explore Mars is a waste since NASA has made mistakes in engaging people who were not entirely honest in providing parts and supplies for the Mars missions.

However, there are several missions still going on and those experiments and samples are giving us more information.

With each mission sent to the Red Planet, we grow closer to the day that humans can figure out how to live on Mars. It may not happen in your lifetime, but maybe your grandchildren or their grandchildren will be natives of the planet Mars.