Mercury – The Smallest Planet In The Solar System

Mercury – The Smallest Planet In The Solar System 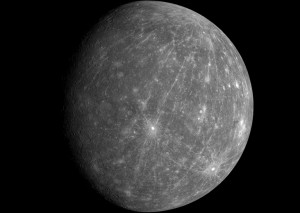 Mercury is a rocky planet and is called a terrestrial planet. It has a solid, cratered surface just like Earth’s moon. Just a little larger than Earth’s moon, it s the smallest planet in our solar system.

It is the planet closest to the sun which makes it hard to see from Earth because it is always close to the sun’s glare.

The only times it can really be seen is at dawn and twilight when the sun’s glare is reduced. Unfortunately for scientists, the small planet can only be seen crossing the sun 13 times every 100 years. This makes it very difficult for us to know much about this small planet.

What we do know about Mercury has been learned very recently. Two spacecrafts have flown by or orbited the small planet. The Mariner 10 was the first spacecraft to visit it.

It took pictures of about 45% of the planet surface. In 1974-75, pictures sent back by the Mariner 10 spacecraft showed that Mercury looks a lot like Earth’s moon. It is covered with craters which are the scars left by the impact of meteoroids.

NASA’s second spacecraft to visit Mercury is called MESSENGER. That stands for MErcury Surface, Space ENvironment, GEochemistry, and Ranging. The satellite flew past Mercury three times between 2008 and 2009. It went into orbit on March 18, 2011. Nearly all of Mercury’s surface has been photographed by now.

The surface of Mercury looks a lot like Earth’s moon. Thousands and thousands of craters cover the planet’s surface. These crates are caused by impacts of all sizes of meteoroids, asteroids and comets.

Most craters are named after famous writers and artists like Mark Twain, Shakespeare and Michaelangelo. Any crater bigger than 250 kilometers (about 155 miles) across is called a basin.

The Caloris Basin is the largest impact crater on Mercury. It is about 1,500 kilometers (932 miles) in diameter! The Caloris Basin was formed when a huge object slammed into the planet. The shock waves  went through the entire planet.

Those waves created hills almost 3,000 miles (about 5,000 kilometers) away on the other side of the planet.

Information from MESSENGER have let scientists make many new discoveries about the planet. This includes the identification of a landform labeled as hollows.

Geochemistry tests run by MESSENGER show that Mercury has a really high level of sulfur and potassium. Those two elements are very volatile, which means they explode easily.

From the pictures sent back to NASA by both Mariner 10 and MESSENGER, scientists have found that Mercury has wrinkles. Scientists believe that after the planet cooled down to its current state the core shrank and the crust buckled.

The buckling of the crust created the wrinkles which are called scarps. Besides the scarps and craters from impacts, the photos also show lava flows. Like Earth’s core, part of Mercury’s core is liquid. The cracks in the surface let this molten rock and metal ooze to the surface.

Scientists always believed that Mercury’s core was a solid ball of iron. However, with the new information they have gotten from MESSENGER, astronomers are finding that they were wrong. Normally, the cores of small planets cool very rapidly.

Finding out that large amounts of sulfur makes up Mercury’s surface, scientists think the core of the planet might still be mostly liquid. Sulfur is lighter than other things that make up Mercury’s crust.

In 1991 astronomers on Earth used radar observations to show that Mercury may have ice from water at its north and south poles in deep craters.

MESSENGER has shown that the material identified with the radar are only present in places that never see the sun. Since these areas are always in shadow, it is cold enough to preserve ice.

Mercury’s orbit is a little like an egg and the planet is only about 58 million kilometers (36 million miles) away from the sun. Since it’s so close to our sun, Mercury is scorching hot on its sunny side and freezing cold on the dark side.

Temperatures can reach 873º F (467º C) on the side facing the sun. However, the night side temperatures plunge to – 274º F (- 170º C). Even though Mercury is the closest planet to the sun, it is only the second hottest planet. Venus is actually the hottest and experiences even higher temperatures.

However, while some gases escape into space they are constantly being replaced by the same solar winds. The little bit of atmosphere that exists on Mercury is called the exosphere.

It is made up of mostly oxygen, sodium, hydrogen, helium and potassium. The dust and debris that are blasted off the surface of the small planet by solar winds and meteoroid impacts create that exosphere.

Mercury has no moons or rings. Anything smaller than the planet would have been burned up by the sun’s heat. There is no evidence that life exists on Mercury. The very thin atmosphere and the extreme temperatures make it very unlikely that life as we know it can exist on Mercury.

However, its day lasts 59 Earth days. If you were standing on Mercury’s surface, you would see a sunrise once every 176 Earth days. When the sun did rise, it would appear three times larger than it does on Earth.