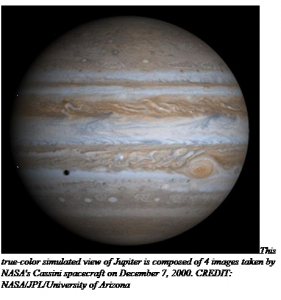 Jupiter is the fifth planet from the sun. It is the hugest of all the planets in our solar system. Like the Sun, Jupiter is made mostly of hydrogen and helium.

Small amounts of water, methane and ammonia are also present. The upper layers are gaseous.

As you go deeper into the planet, pressure and temperature makes the gases become more like liquid.

Even deeper, nearest the core, the hydrogen behaves like liquid metal. The core is a small, solid rock that is more than three times hotter than the surface of the Sun. 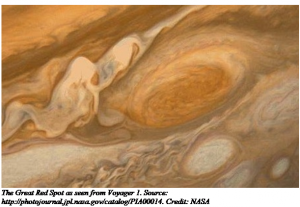 Even though Jupiter orbits much slower than Earth, it spins on its axis really fast. One day on Jupiter lasts only 10 Earth hours.

Because of this fast spinning the planet looks like it’s a little squashed making the equator bulge. This spin also makes the weather patterns very strong in the clouds of gas surrounding the planet.

Jupiter is the stormiest planet in the solar system. There is a permanent but always changing whirlpool of storms. That area is called the Great Red Spot.

It was first seen through a telescope by Robert Hooke in 1664. That means that it has been storming there for more than 350 years.

It is the largest hurricane in the solar system. Another feature of Jupiter is the distinct banding of different colors.

This is caused by the different layers and speeds at which the clouds move. This causes turbulence and lots of storms along the borders of each layer. The Great Red Spot is the best known.

Jupiter has its own mini solar system that is made up of at least 50 moons. There are even more that are considered ‘temporary’ moons.

These temporary moons will become known as moons when the orbit is confirmed by scientists.

Most of the moons are pretty small but four of them are large enough to be seen easily. Those four are the most widely known; Io, Europa, Ganymede and Callisto.

The planet also has a faint ring system with three main segments. The innermost segment of the ring is called the halo and is fairly narrow.

The next segment is relatively bright and is called the main ring. The main ring makes up just more than half of the full ring.

The last segment is called the outer ring, sometimes called the gossamer ring because of how thinly spread the particles are.

These rings are probably made of dust rather than ice like Saturn’s rings. Because of Jupiter’s very strong magnetosphere any debris created by collisions of meteoroids with the moons gets pulled into this ring all the time.

Io (EYE-oh) is the moon closest to Jupiter. It has an iron core and a rocky mantle and crust similar to Earth.

However, Io has no ice or water because it was formed close to the planet. The temperature was very high so any water evaporated almost immediately. This moon is so close to Jupiter that the gravity of the planet makes Io’s volcanoes erupt often.

Europa (yer-OH-puh) is the next moon. It is covered in a crust of smooth ice that may be an ocean of water. Scientists think that if this ocean exists, it could be heated by underwater volcanoes. If this is the case, then Europa might contain.

Ganymede (GAN-ih-MEED) is the third moon. It has a metallic core, a rocky lower mantle and an icy upper mantle and crust.

The surface shows old craters in the ice covering the moon. Those are the dark regions in pictures. The brighter areas are considered younger ice.

These grooves might be newly frozen ice made after impacts by meteoroids. Ganymede is the largest moon in the solar system, larger than Pluto or Mercury.

Callisto (kah-LEES-toe) is the fourth moon. This moon has the most craters of any other object in the solar system.

Scientists think that there might be a layer of salt water beneath the crust. It is believed that Callisto is a ‘dead world’ which means that it would have no volcanic activity on its surface.

If it is a dead world, that would indicate that it is a completely solid rock from the surface to its core. It can be supposed that Callisto also has an iron core similar to the other planets and moons in our solar system. 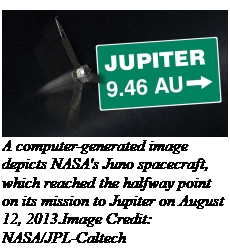 So far, eight spacecrafts have visited Jupiter and its moons since 1973. The Pioneer 10 space probe was the first to get close to the planet.

The probe sent back the first information about the properties of the largest planet in the solar system. It was followed by Pioneer 11.

The Pioneer missions took the first close-up pictures of Jupiter’s atmosphere. The orbits of the two probes let astronomers measure the mass of the planet.

Both probes used radio waves on the atmosphere of Jupiter. Then scientists were able to measure the planet’s diameter.

They compared the pictures of both Voyager and Pioneer missions. In six years the color of the Spot changed from orange to dark brown.

The next mission to meet Jupiter was the Ulysses solar probe. It did a flyby so it could make a polar orbit of the Sun in February of 1992.

Ulysses encountered Jupiter again in February of 2004 in a second flyby. During the first pass of the gas giant, the probe performed studies on the planet’s magnetosphere. Since Ulysses had no cameras, no pictures were taken.

The Cassini probe passed Jupiter in December of 2000 on its way to Saturn. The probe provided some of the best images of the planet ever made.

It also captured an image of one of Jupiter’s smaller moons, Himalia. However, the resolution was too low-quality to show surface features.

The New Horizons probe flew past Jupiter on its way to Pluto. Its closest pass was in February 2007. The probe’s cameras measured the volcanic output on Io. It also studied all four of the large moons in detail. Long distance observations were made of two of the outer moons.

The only spacecraft to orbit Jupiter was the Galileo orbiter. It orbited the planet for over seven years.

The craft made multiple flybys of the four large moons and a few of the smaller moons. In 1994, the Galileo orbiter’s approach to Jupiter gave it a very good view of Comet Shoemaker-Levy 9.

The comet broke apart and impacted with Jupiter. A probe from Galileo descended into Jupiter’s atmosphere in December of 1995.

The probe floated down through the cloud layers about 150 kilometers (93 miles). It collected data for just over 57 minutes.

It was crushed by the increasing pressure, about 22 times Earth normal. After it was crushed the probe melted. The Galileo experienced the same thing when it was flown into Jupiter’s atmosphere in September of 2003.

NASA has one mission going on now. The spacecraft Juno was launched in August 2011. It will arrive in orbit around Jupiter in late 2016.

The Juno will take up a polar orbit so that it can study the planet. Scientists want to know how Jupiter was formed and whether it has a rocky core or not.

The amount of water in the atmosphere and how the mass is distributed will also be studied. Other things to be studied are Jupiter’s gravity field, magnetic field and magnetosphere.

More missions to study Jupiter and its moons are planned for the future. The only one with a firm launch date is set for 2022. That mission has been planned by the European Space Agency.