Astronomy or night sky-watching has been around as long as humans. Prehistoric people used the stars as both a clock and a calendar. Sunrise and sunset marked day and night while the Moon’s phases indicated a lunar month. The Sun rose in a slightly different place on the horizon each day following a cycle that marked a year. People made up stories to explain how the stars caused events on Earth. They saw the outlines of gods and monsters in the arrangement of the stars. They named constellations which are the major star formations that appear at different times of year. We use many of these formations today. Some constellations are more than 5,000 years old. 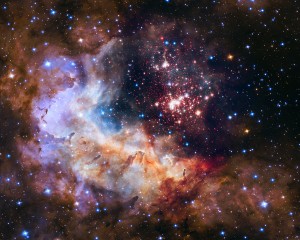 This NASA/ESA Hubble Space Telescope image of the cluster Westerlund 2 and its surroundings has been released to celebrate Hubble’s 25th year in orbit and a quarter of a century of new discoveries, stunning images and outstanding science. The image’s central region, containing the star cluster, blends visible-light data taken by the Advanced Camera for Surveys and near-infrared exposures taken by the Wide Field Camera 3. The surrounding region is composed of visible-light observations taken by the Advanced Camera for Surveys.

Astronomy is the study of the night sky. Astronomy is the most ancient of all the sciences, dating back tens of thousands of years. The word astronomy comes from the Ancient Greek words astro meaning “star” and nomia meaning “law.”

Early astronomers worked without telescopes. They relied on their eyes and a few simple instruments. In ancient Sumeria, Babylonia and Egypt, astronomers recorded when stars rose and set and compiled lists of special events such as lunar and solar eclipses. They developed calendars so they would know when to plant their crops. These keen observers saw that every year the Sun appeared to travel through 12 constellations, which are now known as the zodiac. They also noticed that some stars are actually planets. The word planet comes from the Greek word meaning ‘wanderer.’

Today, astronomers use telescopes to study objects that can’t be seen with the naked eye. Space objects give out other kinds of radiation besides light. Astronomers have special equipment to detect this. Professional astronomers usually study photographs and computer displays instead of looking through telescopes. This is because most faint space objects only show up on long-exposure photographs. Astronomers can spot new objects in the night sky by laying a current photograph over an old one and looking for differences. Professional astronomy involves sophisticated equipment. However, amateurs with binoculars can still occasionally make some important discoveries.

Ancient Chinese astronomers figured out that the year was 365 ¼ days long. They also observed comets, eclipses, and exploding stars called supernovas. In the New World, the Maya of southern Mexico built temples that they used for astronomy. They developed a complex calendar based on the movements of the planet Venus. Later on, Venus was also important to the Aztecs of central Mexico. They saw it as a god symbolizing the power of life.

Astronomers in ancient Babylonia (present day Iraq) recorded the movements of stars and planets on clay tablets more than 2,500 years ago. In early models of the universe such as this, the Sun, Moon and planets all revolved around Earth. Even today, we say the Sun “rises” and “sets,” when it is actually the Earth that is moving. The animals and figures representing the zodiac are 12 constellations that lie close to the yearly path of the Sun in the sky.

The ancient Greeks linked planets with the golds. The Romans adopted this system and gave the planets the Latin names we use today. Because Mercury was the swiftest planet, it was named for the gods’ messenger.

Constellation figures decorate the tomb of an Egyptian pharaoh. Egyptian astronomers tracked the rising and setting of bright stars like Sirius. They also divided the day and night into 12 periods each. This give us the hours we use today.

Begun more than 4,000 years ago, England’s Stonehenge helped astronomers observe the Sun and Moon. At the start of summer, they could see the Sun rise between its standing stones.

The ancient Greeks struggled to understand the universe. By the 300s BC, they had established that Earth itself is round. Most Greek astronomers believed that all the heavenly bodies revolved around Earth. But at least one, Aristarchus, thought that Earth revolved around the Sun. In the 100s BC, Hipparchus compiled a star catalog. He invented magnitudes to compare star brightness and calculated the Moon’s distance from Earth.

The most influential astronomer, Claudius Ptolemy, came along 300 years later. Ptolemy’s model built on the work of Hipparchus and explained that all the heavenly bodies moved around Earth. It was accepted for more than a thousand years.

Nicolaus Copernicus was the first modern astronomer to assert that Earth travels around the Sun. In the next hundred years, other astronomers gathered observations that supported the theory. Tycho Brahe tried to combine Copernicus’ ideas with Ptolemy’s. Johannes Kepler, who worked with Tycho, formed the first accurate theory of how the planets move. Then Galileo Galilei built the first astronomical telescope. He was the first human to see mountains on the Moon. He also discovered the phases of Venus and the four large moons of Jupiter.

Finally, Isaac Newton proposed a theory that explained the mechanics of both the Solar System and the everyday world. Planets, including Earth, are held in their orbits by the gravity of the Sun. In the same way, the Moon is held by Earth’s gravity. Using Newton’s theory, astronomers could calculate the size and scale of the Solar System. They could also accurately predict the movements of planets, moons and comets.