An introduction to the New Horizon mission to Pluto which hopes to encounter the dwarf planet in 2015. The spacecraft left Earth at the greatest-ever launch speed for a man-made object. It flew by the orbit of Mars on April 7, 2006, Jupiter on February 28, 2007, the orbit of Saturn on June 8, 2008 and the orbit of  Uranus on March 18, 2011.

New Horizons will be the first spacecraft to explore Pluto. 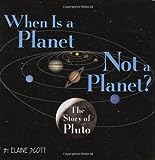